0
Christmas Cider… It’s not too late!
15 December 2020
About Cider
Dancing the fine line between rip-off and tribute
4th December 2020 by Ian Fry in About Cider

Dancing the fine line between rip-off and tribute

To properly explain where the new merch design came from, I have to give you a bit of a history lesson in myself, and ballooning too.

It’s no secret that I am a Hot Air Balloon obsessive. I have been around these colourful skybound monoliths for my entire life, and almost everything I do has some way of revolving around them. My grandfather and father were both pilots, and some of my earliest, and fondest memories, were spent waking up before sunrise, heading to a field bathed in the morning glow and flying (mostly) silently above the world as those who inhabit it start to stir.

Growing up around ballooning also meant growing up around the people in it. You have to be slightly different minded to participate in this sport. It’s essentially a flamethrower, some nylon and an oversized picnic basket that you can’t steer. Nevertheless, there were visionaries, adventurers and those who set goals far higher than anyone I’d known. There were many that I respected, looked up to have the same skill and spirit as one day. In this misfit band of risk-takers, there was one I idolised the most, Per Lindstrand, owner of Thunder and Colt balloons. From his solo record breaking flights, the awesome flights across both the Atlantic and Pacific oceans with Richard Branson, to his innovation in the field of lighter than air crafts, I’ve been inspired by this man ever since I can remember.

I have honoured Per in various ways throughout my cider-making career, the most obvious one being naming our pear cider directly after him, and the less obvious “Into The Jetstream” named for the time he flew across the Atlantic in a Hot Air Balloon by entering the jetstream and breaking the hot air balloon speed record, which still stands today.

Thunder and Colt had a logo that I still find beautiful to this day. A rainbow of balloons above the 80’s era font “THUNDER AND COLT” with “HOT AIR BALLOONS, AIRSHIPS, INFLATABLES” or occasionally “ALTITUDE, DISTANCE, DURATION” when they held the record for each attribute. I see this logo as a statement to the world. This is what we’re about, this is what we do, get used to it. Something I wanted to convey with our own design this year.

Above: The Thunder & Colt logo 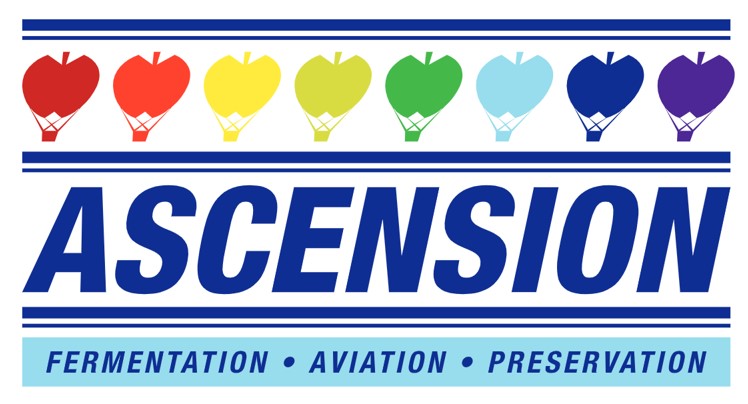 Above: Our Thunder & Colt inspired logo for use on merchandise.

Snap into 2020, and I was given some time by the pandemic to look at Ascension with different eyes and take a step back to ask why I was doing this. Simply, it’s all about what I call the triangle of Ascension.

With these cornerstones of Ascension in place, I went to local designer Hackney Design and presented him with the elements above. What we got in return was a perfect representation of Ascension, and one I’m proud to have emblazoned on our merchandise.

Thunder and Colt Balloons closed down in the 90’s, but hopefully this tribute to them will bring a smile to both balloon and cider enthusiasts, thinking fondly not only of the past, but looking forward to what the future holds as well.

You can find our merchandise emblazoned with this design, along with cans of delicious cider, on our webshop here: www.ascensioncider.co.uk/shop

It is an offence in the UK to sell alcohol to anyone under the age of 18.

By clicking continue below – you confirm you are aged 18 or over.